The factory premises of P-D Refractories GmbH Dr. C. Otto have three chimneys. With a height of 120 m, one of them is the highest brick-walled chimney in the Ruhr region. Since December 2001, a nesting box for peregrine falcons has been installed on this chimney at a height of 62 metres.

Last year there was another successful brood in this nesting box, as can be seen very well in the picture. Several times already, the pair of peregrine falcons had young ones who sprawled from our factory premises looking for new territories — this way the falcon family spreads.

The actual habitat of peregrine falcons is varied landscapes and most of all high rocks for breeding. Since the natural habitat can hardly be found here, the falcons choose areas that feature high buildings such as chimneys, cooling towers, etc. as “substitute rocks”. The Arbeitsgemeinschaft Wanderfalkenschutz Nordrhein-Westfalen (Association for Peregrine Falcon Protection in North Rhine-Westphalia) aims at offering peregrine falcons suitable nesting aids. So far, the Association’s members have been able to install more than 140 peregrine falcon nesting aids, primarily in industrial plants. 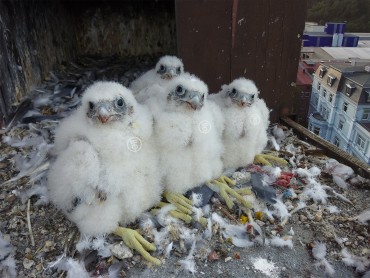 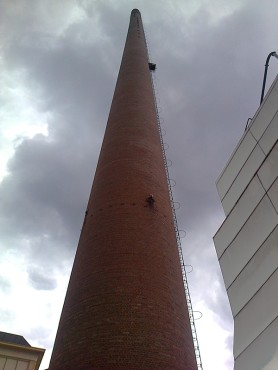